Welcome to our Musician department Mr Hëvvitt who is a London-born film score composer and classical music arranger. David began playing the piano at six and later studied music in London and United States.  Hëvvitt was recently awarded ‘Best Film Score’ by both the Los Angeles Film Awards and The Accolade Global Film Competition for his work on the critically acclaimed feature film ‘Delaware Shore’, which made the 2019 Oscar list.

Hëvvitt’s music has been used all over the world, in films and on TV shows like ‘En Otra Piel’ a Spanish-language ‘telenovela’ produced by United States and México- based television network Telemundo Studios. His awesome trailer score for the Playstation 4 beta hit ‘WARTHUNDER’ garnered over twenty seven million YouTube views. His work can also be heard on ‘The Driving Dead’ starring Michael Rooker from TV’s ‘The Walking Dead’ (directed by Gale Anne Hurd -Terminator, Aliens), Mad Men and Family Guy.

Hëvvitt’s music is published worldwide and he most recently became part of the Warner Chappel legacy, 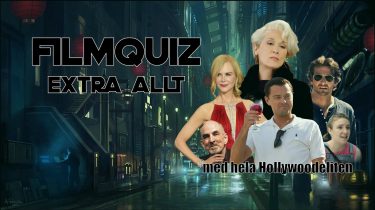 Light-hearted entertainment on a high level
Film Quiz Extra Allt is the fuller version of the classic pub quiz. Hosted by two actors who
challenge the audience’s knowledge within film and TV. We compete in teams. We will
watch scenes both on the big screen and live. The questions range from old time film
classics to the latest tv-series. For the braver ones there are opportunities to both impress
and get bonus points by giving a performance. Those with very specific knowledge
also be rewarded. Light-hearted and fun entertainment that can be combined with dinner
or other activities.
We offer everything from general to thematic quizzes, like our popular Christmas
and New Years quiz.
Duration: 1-2 hours depending on your wishes regarding the setting.
From 10 participants and up.
Read more

Action and Fighting actor Robert Follin is a well known profile in Scandinavian and International productions. He has been seen in TV-series as Vikings, Heder, Wisting, Jägarna, Bron etc, as an stuntactor, fighting and stunt coordinator. Robert has recently been acting in Scandinavian Winther Theater Birkebeinerspelet which is based on the actionfilm Last King (2016).

A film crew sets off on a catamaran to make a thriller. Once out in the archipelago, they are offered surprises that no one could have imagined and in the end they can not distinguish between reality and fiction.

In summer 2019 we collaborated with HiQ Finland, Calcus and ST1 for a new mobile application.

Mathilde A Ypsöy held this 2 days production in West Norway. We want to thank Dale of Norway for

sponsoring us with the Norwegian Outfit.

Alea Mehaj, Born 20 desember 2011, has already accomplished a lot throw the last 4 years as an actress and a model. Alea is studying at a theater school, is active in children’s theater, she takes private lessons in acting by coach Merete Vold. Alea has done national TV, TV-series, shortfilm, feature film, in Norway and Southern Europe.
In november 2018 she won the Young Miss Universe in Kiev.

She has been featured and interviewed by several international magazines, as a covergirl. 2019 she participated in WCOPA as an actress and model with the Scandinavian Team.

She will also be part of NY and London Fashion Week as the fabulous fashion model she is.

Alea is an amazing hard-working young talent, so please stay tuned and keep following her career in the future.

Collaboration with Sony Nordic and the talented Wedding photographer Cristiano Ostinelly from Italy,
was visiting Oslo and had his workshop at Villa Malla in Hurum.

Designer for Set / Production / Event / Home / Interior Christina Svedal is filled of creative energy, has an excellent sense of trends and modernism. She is known for film and TV serie productions, and is the main designer on Alan Walkers and IGNITE K-391 llllXl video production at MER musikk.